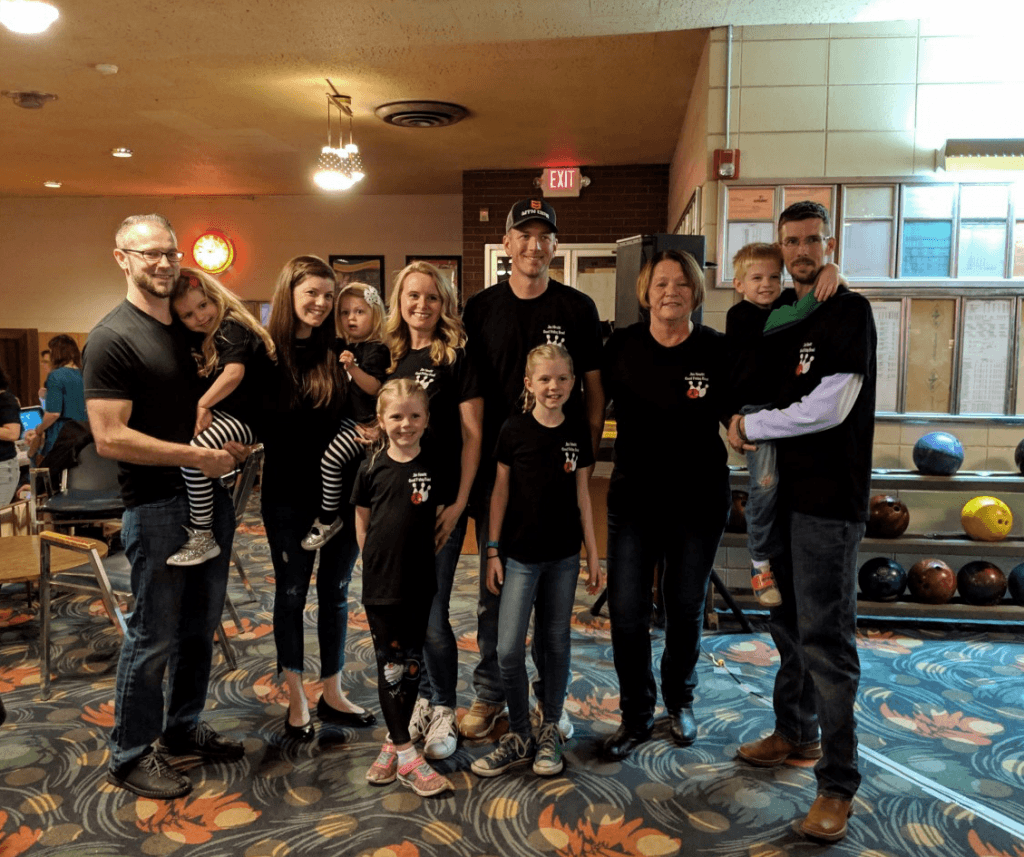 When Jim was recovering from brain surgery, the hospital staff brought in a makeshift bowling alley into his room. It was Good Friday, and Jim and his family had a tradition of going bowling the Friday before Easter.

Never one to miss out, pins, bowling balls and a “lane” was created in honor of this tradition, in spite of Jim’s diagnosis of a glioblastoma (GBM). To level the playing field, everyone had to bowl with their left hand and use wheelchairs. That was more than 15 years ago.

Bowling for a Greater Purpose

Every year since, Jim’s family, including his wife, Serena, two sons, daughter and their spouses along with relatives and friends, continue Jim’s legacy in a special bowling event.

The Jim Hewitt Good Friday Bowl is a community event with the purpose of supporting ABTA research and patient services. This event has been part of the ABTA’s Fundraise Your Way program for 15 years.

“When Jim was diagnosed and treated for late stage glioblastoma, the ABTA helped answer our questions through their informative website, and whenever we called the ABTA, we were always provided resources that could help us along this difficult journey,” said Serena.

Jim, a former Vietnam veteran and accountant, was always sharp-witted and keen on details. He came home after work one day and urged his family to go bowling…on Good Friday.  He reasoned that if bowling was prohibited on such a day, it would be common knowledge. It wasn’t, and they went.

A few years later, Serena noticed that Jim was no longer acting like himself. He became more disoriented, tired, and started to experience frequent headaches. He would forget details or requests on quick errands.

“I asked Jim to get me cans of tomatoes from the store after work. That night, Jim called me three times asking the same question – what did I need from the store?” said Serena. “That’s when we decided to schedule an appointment for a brain scan.”

Finding a golf ball-sized tumor in his brain, it was early spring when Jim had brain surgery to remove as much of the tumor as possible. Jim became aphasic, limiting his words to “bye-bye,” “Timmy” and “football.” But Jim’s influence and bold personality helped Serena and his kids learn what he was really trying to communicate. Sadly, Jim lost his battle with the GBM in 2003.

“It was shocking to learn that only one penny on the dollar goes to brain tumor research. Since that moment, we knew we wanted to help the ABTA any way we could,” said Serena.

Raising nearly $50,000 for brain tumor research, Serena and her family has seen the bowling event grow from a small, family memorial to an organized community event that brings together an extended network of family, friends, neighbors and colleagues that honor Jim’s memory in a fun and informal setting.

“If we could help fund research for early-career, enterprising scientists and doctors who are looking to find a cure or more effective treatments, it might spare other families what we went through,” said Serena. “That’s why we host the Jim Hewitt Good Friday Bowl each year.”

Join families like the Hewitts who support brain tumor research and patient services through unique and creative ways. Learn more about Fundraise Your Way for the ABTA or contact Kitty Snow, community manager at ksnow@abta.org or (773) 577-8766 to get started.