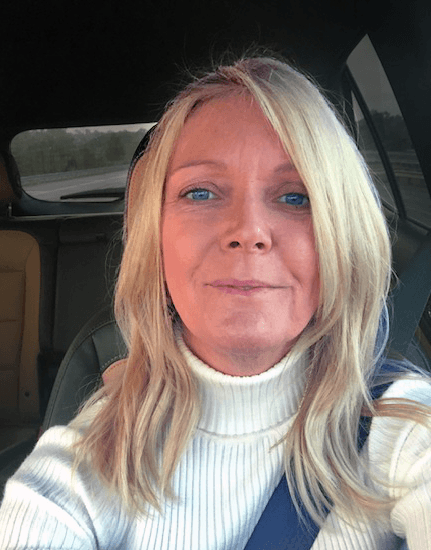 Oddly enough, upon reflection, it appears “Tina” tried to make her presence known to me many years ago…

I started having right-side neck pain at the base of my skull over seven years ago. Could have been from job stress, driving, or sleeping wrong on it. I undertook multiple treatments such as chiropractic techniques, Biofreeze ointment, massages–you name it, I tried it. After four months of dealing with the pain, it mysteriously went away. Awesome!

In February 2013, my husband and I relocated to Georgia. The pain surfaced again—same place, same thought—stress! This time, it only lasted for approximately two weeks. I thought to myself, “Great, I really need a therapist to manage this stress.”

At the age of 48, in February 2017, my neck pain reared its ugly head again and with it a headache that only hurt when I physically laid my head down. An immediate pain, truly felt like someone had taken a baseball bat to the back of my head. Sit up? Pain gone. Lay down? Bam!

I dealt with these symptoms for a couple of weeks thinking again that stress was the culprit, until new symptoms emerged—dizziness and a five-second “blackout” during a presentation I was giving. That day, I had a panic attack and went to the ER. After sitting there with my husband for hours, I felt better but was tired of waiting and decided to leave.

The next day, I self-diagnosed myself via Google with a “middle ear infection.” I scheduled an appointment with my PCP for April 2017. Fluid in my ears led the doctor to suggest further testing, including a CT scan, which led to further doubt, and an MRI scan the following week.

Monday, May 8, 2017, during my work-from-home day, I received the call that informed me I had a brain tumor at the base of my skull. While this was tragic, I was relieved that the signs existed for a reason. Their validation led to the eventual answer.

A phrase that stuck with me was, “Meningioma, more often than not, they are NOT cancerous and some can be taken care of with proton therapy, without surgery.”

While my Tina Tumor was not cancerous, she was large and located in my brain stem, which would require surgery.

My husband and I met with my surgeon at University of Health in Florida towards the end of May. The surgeon walks into the room, shakes our hands and at first, starts to talk about the tumor. He catches himself, grabs a stool, pulls it up beside me and changes the entire scene, “So, how did you two meet? How long have you been married?”

While I am thankful that he showed empathy and compassion, I KNEW this isn’t good.

My amazing husband had to answer the questions because I was speechless, processing what was coming next.

What came next? Large tumor, surgery to remove, with potential consequences:

Upon reviewing the above, I agreed to surgery, upon the condition that I have five wishes if anything went wrong. The date was set for June 5, 2017.

The surgeon prepared a 3D-mold of my head and tumor, in order to accustom himself to the new location and sensitive nerves. The surgery took 24 hours and removed only 20% of the tumor due to its and inconsistency.

After seven days in the ICU, a second surgery, and more MRI scans, I was finally released, minus other related but smaller issues to deal with. I reported to work after only 11 weeks out.

The most recent scan showed no growth from Tina Tumor. My surgeon tells me he was able to give me “decades to live and that Tina is a very, very slow- growing tumor.” Let’s hope she remains quiet! I am a little tired of Tina.

My next brain surgery is in September.

I am lucky for many reasons, not only am I alive, I have a family that has protected me my entire life. When Tina Tumor showed up, they rallied and were there for my husband and me every single step of the way. Family and friends sat vigil at the hospital, visited at home and were there for whatever we needed. They all put their lives on hold to help! I am ever thankful and grateful for everyone in my life and I cherish every one of them for their love and support!

The moral here—I believe we need MORE proactive measures for identifying brain tumors—more preventative measures, more exposure. I believe if someone had encouraged me to get a scan in 2004 when the symptoms first appeared, Tina Tumor would have been caught earlier and perhaps been out of my life forever.